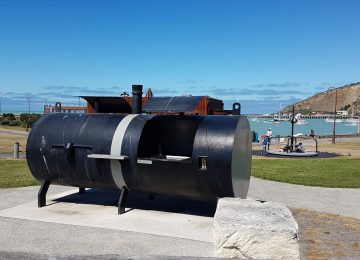 Oamaru on the eastern coast of New Zealand’s South Island is widely regarded as the ‘steampunk’ capital of the world. What’s steampunk I hear you ask? Well, it’s a sub-genre of science fiction that incorporates technology and designs – inspired by the industrial steam-powered machinery of the Victorian Era (1837-1901). The term steampunk was coined in the 1980s and is based on inventions that the Victorians might have created for the modern world.

In fact, steampunk is a whole subculture with its own fashion and lifestyle and it’s found a home in Oamaru which just happens to have some of the best-preserved examples of Victorian era architecture in New Zealand.

Even the local playground in Oamaru has a steampunk theme. That’s where Urban Effects come in. One of the key principles of steampunk is the recycling and re-purposing of equipment, so when it came to making Steampunk Park a great place to stay and play, we were asked to figure out how to upgrade the existing BBQs so locals and visitors could cook up their steampunk-inspired burgers.

Our BBQ range includes a number of retro-fit options to make it easy for communities to update their existing facilities or find the right fit for a customised bench. We supplied Retro-Fit Electric for Steampunk Park which feature a coin selector start, and innovative heatcell technology that transfers consistent high temperature across the entire hotplate for even cooking.