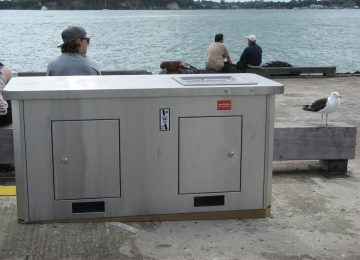 The client required the versatility to move the BBQs for different events along the waterfront with the assurance that the BBQs would be securely stable while in use. Urban Effects customised the Urban 1900 Double BBQs to allow the BBQs to be easily moved and relocated when needed, and used in multiple locations.

Other tailored features included an extended bench space and working area.  This was achieved by reducing the number of hotplates to one instead of two. The BBQs were also supplied with a $2.00 coin selector providing users with 28 minutes of cooking, at temperatures up to 320 degrees for energy efficiency.

The Auckland community now has a fresh new way to enjoy the outdoors following the installation of the two urban BBQs at Queens Wharf. The superior cooking temperature of the energy efficient hot plates were tested by Masterchef New Zealand judge Josh Emett and Breakfast’s Sam Wallace on tv recently, with tasty results. With great fishing within metres, the community can now cook their fish as they catch it – outdoor cooking has never been so fresh.